Dr Tina Makereti has a PhD and Masters in Creative Writing from the International Institute of Modern Letters. She is a novelist, essayist, curator and short fiction writer. Her first novel, Where the Rēkohu Bone Sings (Vintage, 2014) has been described as a New Zealand classic and 'a remarkable first [book that] spans generations of Moriori, Māori and Pākehā descendants as they grapple with a legacy of pacifism, violent domination and cross-cultural dilemmas.' It was longlisted for the Dublin Literary Award 2016 and won the 2014 Ngā Kupu Ora Aotearoa Māori Book Award for Fiction.

Her short story collection, Once Upon a Time in Aotearoa (Huia Publishers, 2010), which combines mythological and contemporary stories, also won the Ngā Kupu Ora Māori Book Award for Fiction in 2011. Her latest novel, The Imaginary Lives of James Pōneke (Vintage, 2018) was longlisted for the Ockham NZ Book Awards Fiction Prize 2019 and the Dublin Literary Award 2020. In 2019 it was published in the UK by Eye & Lightning Books, and in audiobook by Aurora. A forthcoming film adaptation, from Taika Waititi and Carthew Neal's Piki Films, was announced in 2020. Tina is editor of an anthology of Māori and Pasifika fiction, Black Marks on the White Page (Vintage, 2017), with Witi Ihimaera. She has curated exhibitions on social and cultural history at Ngā Taonga Sound & Vision and the Courtenay Place Light boxes, and been guest curator for Verb Festival and Auckland Writers Festival.

At the Auckland Writers Festival Free Public Lecture in 2017 , Tina advocated for a more rich and representative house of New Zealand literature, which continues to be the goal of much of her research, teaching and writing. She has spoken about writing and Māori literature throughout New Zealand and in London, Edinburgh, Jamaica, Toronto, Taiwan and Frankfurt. In 2016 Tina won the Pacific Regional Commonwealth Short Story Prize with her story, 'Black Milk'. Other recognition includes the Royal Society of New Zealand Manhire Prize for Creative Science Writing 2009 (non-fiction), the Pikihuia Award for Best Short Story Written in English 2009, the 2014 Randell Cottage Writer in Residence and the 2016 Beatson Fellowship. She is currently working on her third novel and completing a collection of personal essays, titled This Compulsion in Us. Tina is of Ngāti Tūwharetoa, Te Ati Awa, Ngāti Rangatahi Pākehā and, according to family stories, Moriori descent.

"A major re-think of the science-policy interface is needed to reflect Te Ao Māori perspectives, aspirations, and priorities."

Join some of the authors of a new report that argues for a Te Tiriti-led science-policy approach for Aotearoa, and find out why this kaupapa is so important for Aotearoa. 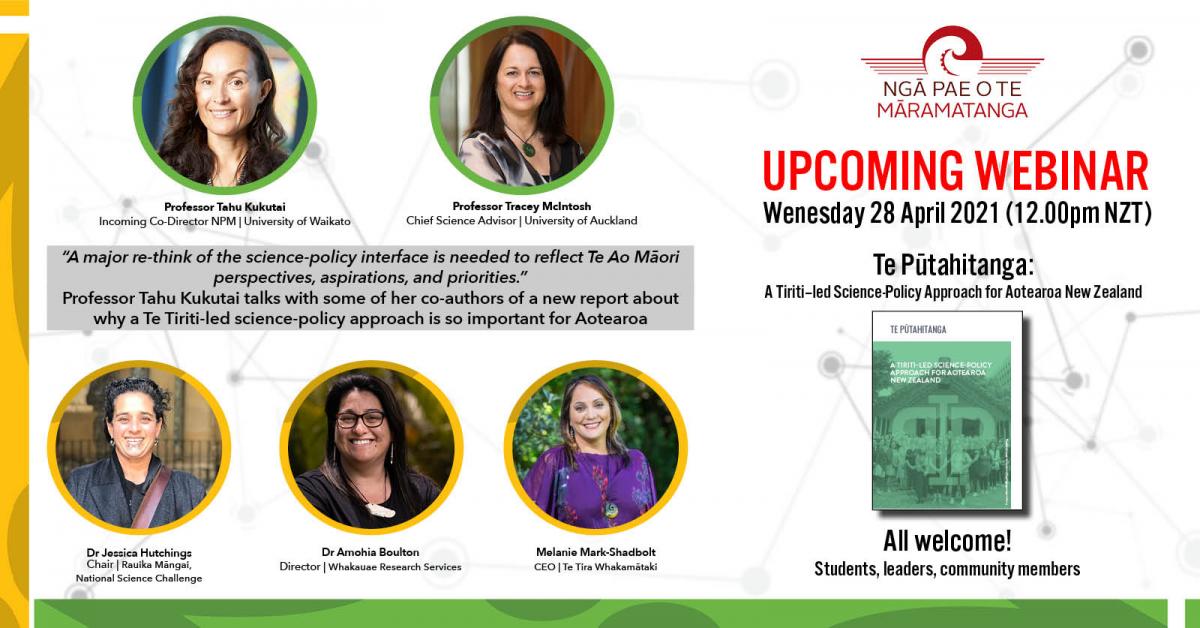