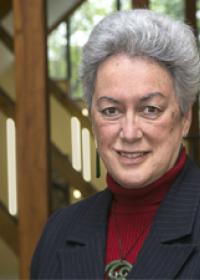 NPM would like to recognise and acknowledge Professor Margaret Mutu from the School of Māori Studies at the University of Auckland - who has this week been awarded the Pou Aronui Award by the Royal Society of New Zealand (RSNZ) for her sustained and extensive contribution to indigenous rights and scholarship in New Zealand.

Margaret has been a principal investigator, award holder and supporter of Ngā Pae of te Māramatanga for many years - she is esteemed both nationally and internationally for her work in indigenous scholarship with research spanning treaty settlements, Māori rights, sovereignty, linguistics, oral histories, Māori resource management and conservation practices - and many more.

In giving her the award, the RSNZ selection committee noted that as "claimant, researcher, cultural expert, and negotiator for her own people, Margaret has tangibly enhanced their cultural and economic wellbeing.

“The integration of her expertise in linguistics, oral histories and treaty settlements has also contributed significantly to the revitalisation of language and culture in Māori communities more broadly.”

Over the past three decades years, Maraget has nurtured Māori research through formally and informally mentoring many emerging Māori scholars from across New Zealand. She has also authored many articles and book chapters, as well as a number of books including;

She is currently working on a Marsden Fund project which is exploring Māori claimants’ perspectives and experiences of Treaty of Waitangi settlements.

Along with the Royal Society of New Zealand, everyone here at Ngā Pae o te Māramatanga would like to acknowledge Margaret's considerable contribution her people of Ngāti Kahu, Te Rarawa and Ngāti Whātua, to our centre and for her ongoing service to humanities and the promotion of indigenous rights and scholarship.