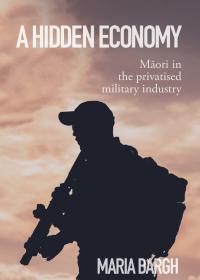 A new book by Victoria University of Wellington senior lecturer and NPM researcher, Dr Maria Bargh, offers an insight into the highly secretive world of the private military, while also challenging perceptions about the economic contribution of Māori.

A Hidden Economy, which was supported by an NPM Publications Support Grant, explores Māori participation in the private military, suggesting that the extent of involvement presents a challenge to stereotypical views which primarily consign the Māori economy to the farming, fishing and forestry industries.

Dr Bargh believes the relatively high proportion of Māori entering private military organisations is partly a reflection of a large percentage of Māori in the New Zealand Defence Force, although many may not have initially been aware of the private sector possibilities.

The book is the end result of what started out assimple curiosity about this traditionally closed world.“In the course of my day-to-day research, I kept hearing about Māori who were travelling to and from places like Iraq or Afghanistan in a capacity outside of a typical nation-based defence force,” says Dr Bargh. “I became very curious about all this activity, but because of the highly specialised and secretive nature of the work, I was a little nervous about exploring things further."

"This world is not particularly well documented for a reason. People don’t tend to just voluntarily come forward.”

Undeterred, Dr Bargh started making enquiries to see if anyone was open to discussing their experience and was amazed by the positive response. “In many respects I put this down to something very unique to the principles of Kaupapa Māori. The way the network developed from my initial enquiries meant the trust was already firmly in place by the time I reached the key individuals.

“Because of this, the participants tended to speak very openly and frankly about their work inthese organisations. This was great for the book, but it also meant I had a tremendous responsibility to them as individuals.”

A Hidden Economy is published by Huia Publishers and was officially launched at VicBooks on the University’s Kelburn campus on Wednesday 18 November.

Copies of the book will be available at your local bookstore, or can be ordered from the Huia Publishers website.